Introducing the SIGA series, an ongoing blog with the participants of the Student Internship Graduate Award who detail their experiences on the year – long programme where young makers train with master craftspeople. In the first edition silversmith Hazel Thorn shares how, her upbringing inspired her works, the influences she has incorporated through her education and how she applied for SIGA.

I love making things, and I find metal an incredibly exciting material to work with. The inspirations for my work lie in two areas - one is in experimenting with metal itself, and one is in an appreciation of wild landscapes. I grew up in a remote area of the Highlands of Scotland, and a great love of my surroundings there is a driving force in my work. I want to convey not simply the visual aspects of such places, but the complex feelings associated with being there. Some of my work speaks of peacefulness, or of growing life, or of the powerful forces of the natural world – in all my work I aim for a sense of movement and change.

Painting has also played a role in the style of my silversmithing work. Studying at Edinburgh College of Art allowed me to learn metalwork skills alongside developing a creative design process. In my first year, in the department I enjoyed the apparent disjunction between the care and precision of starting to learn jewellery and silversmithing techniques, alongside the freedom of large-scale exuberant painting. It was my fervent hope to combine these approaches, to make metalwork imbued with a fierce and loving energy. 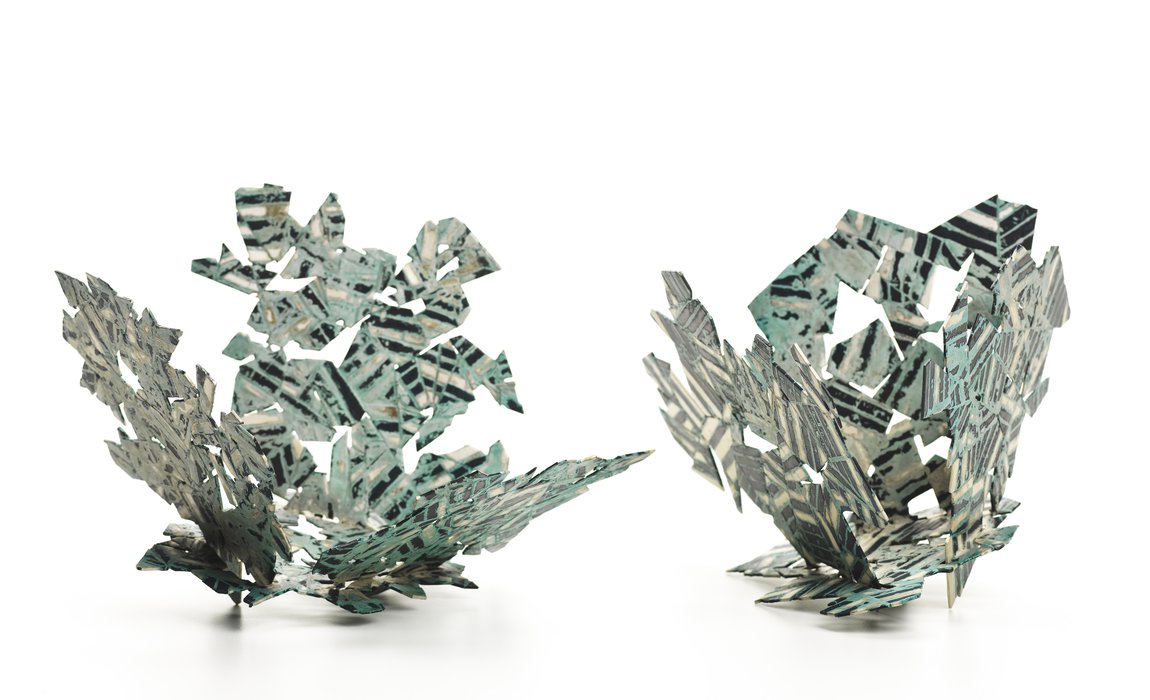 For me, the interplay between metalwork techniques and subject matter is a complex one. Processes are central to my work, and I do not generally want to use them to specifically replicate a particular image. Instead I prefer to give free reign to a creative and evolving making process, and see how an abstracted essence of a place can emerge.

That said, my work is far more controlled than it may appear at a glance. I assemble sheets from small pieces of different metals, some precious and some base. When fusing these together, I can decide where each one is, and I know what colour it will turn in the patination process. The same chemical is applied to the entire object, and the pattern comes from the structure of the metal sheet. Silver remains white, gilding-metal (a high-copper brass) turns black, and the new mixture where these two have alloyed together during fusing develops into a vibrant blue-green. I often develop a pattern and then plan what kind of form I should make from it, aiming for a harmony between these aspects. I like working in pairs or groups of objects, especially as this can highlight differences between them, leading to a dynamic visual conversation.

The SIGA application process started with sending off a large box of sketchbooks and a portfolio of my work. When I was offered a place, I attended a meeting at the Goldsmiths Centre, for which I prepared some new design work. Talking this through with the judging panel was a very helpful way to start discussing what skills and techniques to decide on for my tailored SIGA programme. It was brilliant to be given so much say in what to learn and who to study with - I was keen to pack in as much as possible, so am attending placements on a wide variety of techniques.

My SIGA placements are with Adrian Hope, Rauni Higson and Mary Ann Simmons, three makers who I have long admired. The chance to spend a total of sixteen weeks studying with these master silversmiths is a life-changing opportunity, and the amount of learning possible in such intensive bouts of study is astonishing. While advancing my skills with technical projects, I am designing new work to make during and immediately after the remainder of my placements - and I am certain that my work will be influenced by these experiences for decades to come. 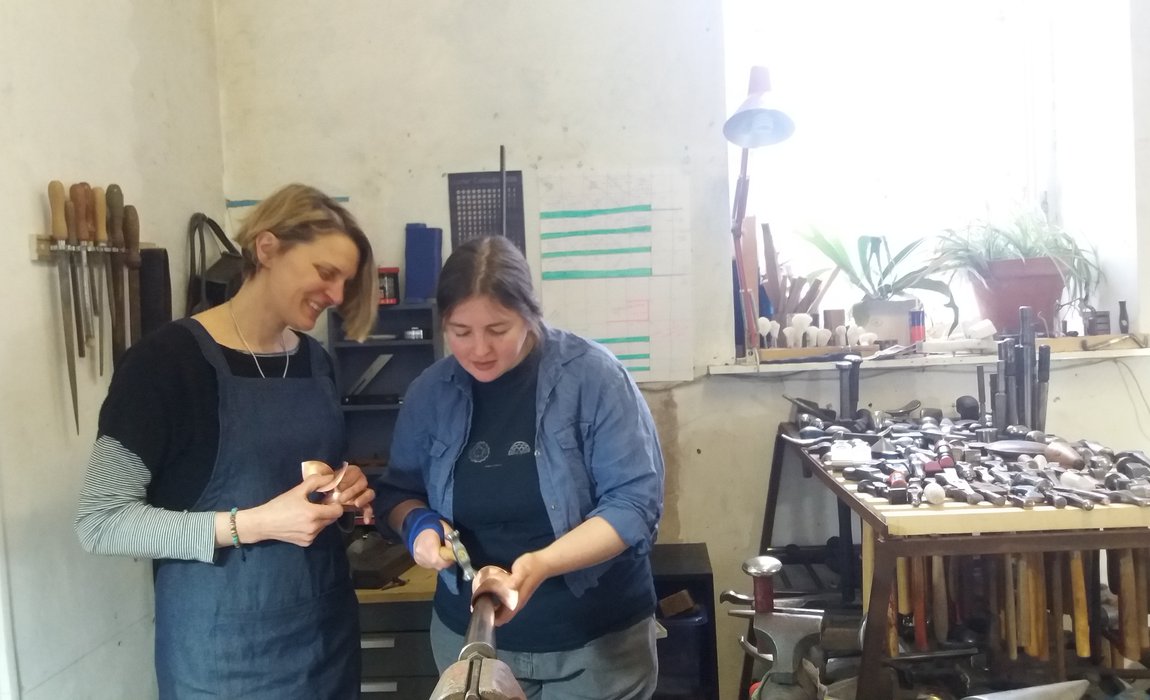 Having begun my first placement with Adrian Hope, I have been developing a new body of work, in which I will move away from my usual field of mixed-metals and patination. I am working in plain metal, partly because it is best to learn new skills without extra complications, and also because of my plans to branch out from my usual style of work. I want to create objects which are patterned in different ways, and others whose impact is reliant on bold form without any pattern. My eventual aim is to combine these ways of working, creating groups of varied but related objects.

In the next installment of the SIGA series find out about Hazel’s experiences with Adrian including learning ‘advanced raising techniques and what she hopes to learn in subsequent placements.

Interested in technical or business training? Find out more about our courses.