Gregory Parsons, curator of the Pamela Rawnsley 1952-2014 exhibition, shares some of his knowledge on curating exhibitions and also gives us an insight into the stages involved in putting together this particular retrospective exhibition at the Goldsmiths' Centre. 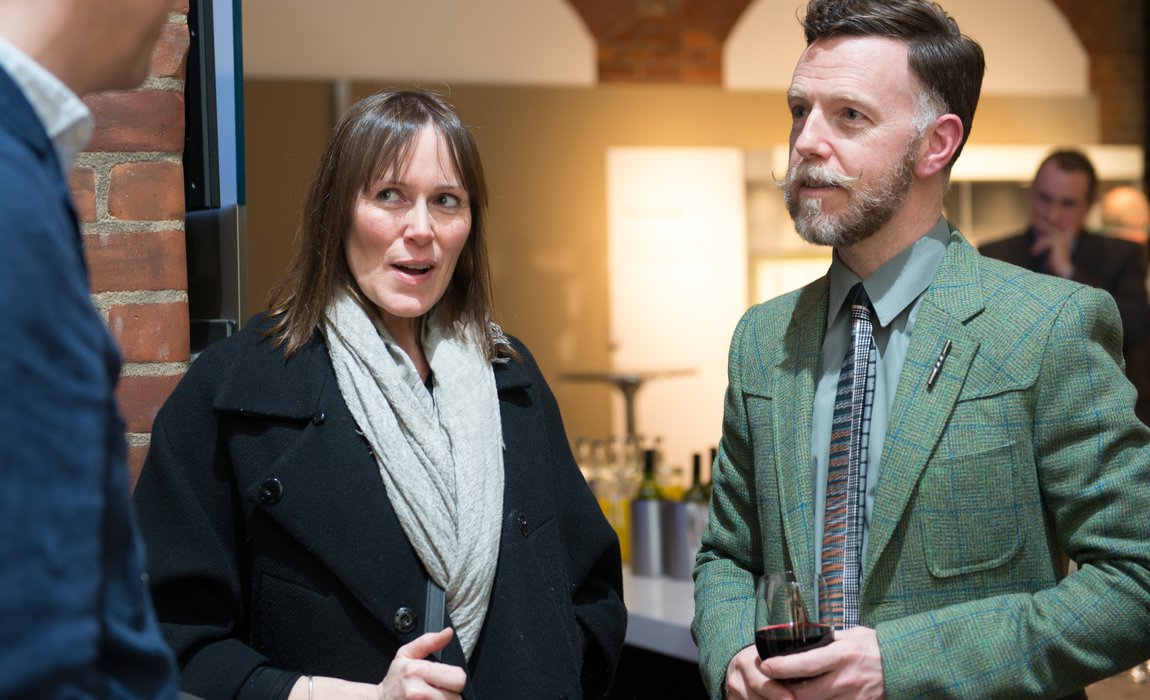 Well, it was a bit of a long route but I started off by studying textile design at degree level. When I finished that, I was asked if I wanted to be an artist in residence at a craft centre in North Wales which was the Ruthin Craft Centre. This was back in the early 90s. I worked as a designer-maker there for two years and did a solo exhibition which toured the UK. I then decided that I would go and do my Master’s degree, so I came to London, went to the Royal College, and then I worked in the textile industry and then the fashion industry. Following this, I decided that I wanted to be back in the applied arts because that is where I felt happier. It so happened that the Ruthin Craft Centre was being redeveloped. They had a new building constructed and they asked if I would like to help set up the retail gallery and the initial exhibition, so I went to help. That has led to a really long and fruitful relationship for the last 8 years now since 2008. It gradually developed into curating work and working with other institutions as well.

What are the stages involved in curating a retrospective exhibition such as this, from conception of idea through to completion?

The first thing really is to see how much and what work is available and obviously thinking about the space that the exhibition is going to be staged in, so we know how much we can fit in the show cases or plinths we have to display things on. All sorts of these factors have to be considered. Of course the main element of the exhibition is the work, so really having a look at the work that is available.

Matthew Tomalin, Pamela’s husband, has a pretty substantial collection of work from most periods of Pamela’s career so before we started working on the show, he had catalogued everything into chronological order. Then we, in this particular instance, met at his and Pamela’s home and started to go through the work and see what was available.

How much and what kind of research did you have to do before you started designing it?

Once we decided what the most important pieces to put in the exhibition were, it was a case then of thinking whether we wanted to run it in chronological order, so from the earlier stages of Pamela’s career through to her most recent work, which is what we decided to do pretty much. We decided to put most of the jewellery together in one area chronologically and then we went through into the vessels. We did that in a circuit around the gallery which helped clarify our minds. Once we decided that, we were able to think about what the display cases would be and what work and how many pieces would fit into the cabinets and therefore how many pieces we could use. So that’s really how we went about it. 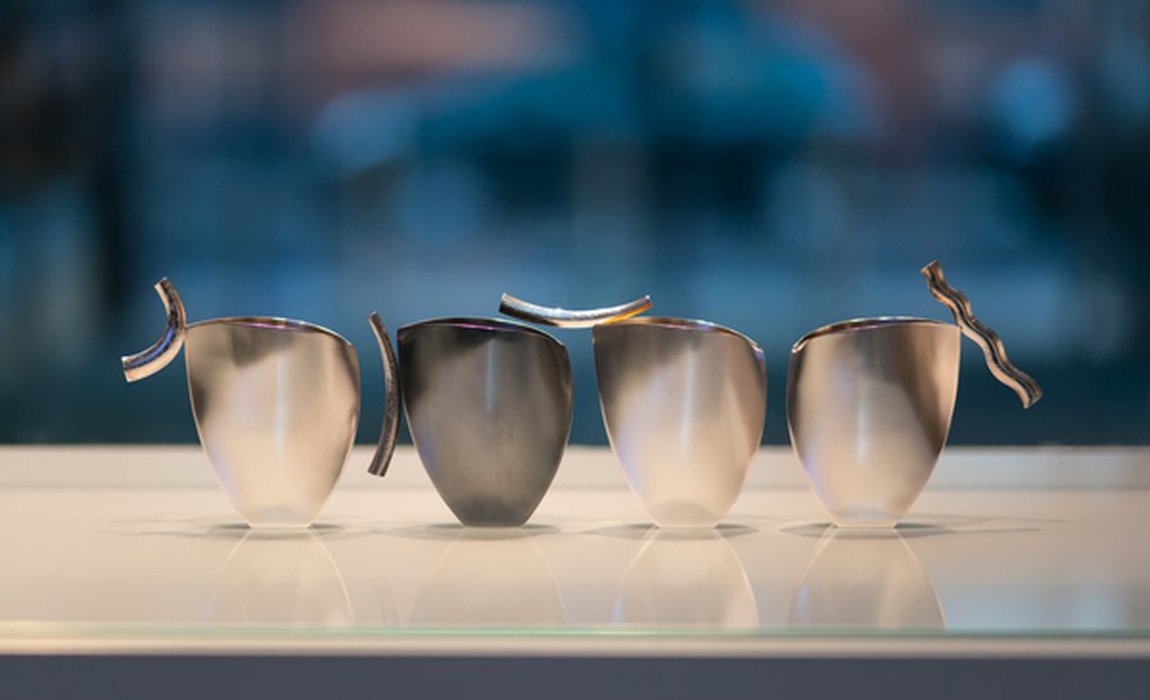 How long did it take to plan the Pamela Rawnsley exhibition? And were there any particular challenges you faced whilst doing so?

I suppose it was nearly 12 months in the end by the time we started our discussions and then arranged meetings. I’m based in London and Matthew lives in Brecon so that was a bit tricky. It’s great to be able to physically handle and see the work. There weren’t any stumbling blocks particularly; it was a really wonderful process to go through and a process of discovery for me as I hadn’t seen all of Pamela’s work especially from her early period.

I’d known Pamela for quite a few years but not in daily contact with her. I would see her regularly at Collect where she would show with Ruthin Craft Centre. I would visit and then later on, if I was helping out at her stand, I would find out much more about her recent work. So it was a really enlightening journey actually. There weren’t really any stumbling blocks. It was a fairly clear process.

What role does the space play in your curation in general? And how did you decide on the best way to display items from Pamela’s different collections and works here at the Goldsmiths’ Centre?

It’s quite a different space from the one that the show was initially conceived for as we didn’t know at the beginning that the show would come here to the Goldsmiths’ Centre, but we really wanted to use the same jewellery display cases that we had in the original exhibition. As a result of the ‘Sense of Jewellery’ exhibition that you staged here last year, the glass display along the left hand side as you walk in to the building was covered with birch ply, and fortuitously you decided to keep that here which enabled us to use the glass display cases. Because the foyer space here doesn’t really have wall space to hang work on, it enabled us to use the cases which was fantastic. Then we decided how we would lay the rest of the work out depending on what we felt were the key pieces to be seen when you walked. So we didn’t follow in such a direct way the chronology because of the lay out of the space, but more or less, so we were able to use the cases that you have here at the Centre and manipulate the display so that it works and I think that it works really, really successfully.

What did you enjoy most about putting together this exhibition?

I think probably going back to what I was pretty much saying before about the actual discovery of all of Pamela’s work throughout her career because some of it was completely new to me. Also just spending time very intimately with it and being in her workshop, being in her home. It was a very emotional experience actually. It was very touching for me to work on.

And now a little bit of a difficult question; do you have a favourite piece from the exhibition?

That is a really difficult question! When I used to work on the Ruthin stand during Collect, and when Pamela was there, she’d always encouraged us to wear a piece of jewellery if we wanted to. I wore a brooch the last time, I guess that would have been 2013 I think, and it’s one of the brooches on display at the exhibition. I think that would have to be the piece for me as it has such a lovely memory attached to it.

What do you think makes Pamela’s work unique and sets her apart from other silversmiths?

So many silversmiths of course have such amazing technical ability. I think what set Pamela slightly apart is some of the techniques she used for, particularly in her most recent vessels and silversmithing, the joints of curved pieces of silver and the lining up of those. I know from talking about technical aspects and the process, not being a silversmith myself, they are incredibly difficult to do. The soldering of these curved lines on a silver vessel which consist of 5 individual pieces or curved silver which have been cut meticulously and just that skill in putting all of the sections together is mind blowing for me. And then in some cases where the silver has been embossed on first prior to being soldered brings with it other technical challenges.

Also the breadth of the work, looking at this as a retrospective and throughout her career, and also the consistencies of things. You see elements of techniques or design, mark making that sort of reappear but in new ways so she was always reflecting but in different ways and almost reinventing it, always moving forward. 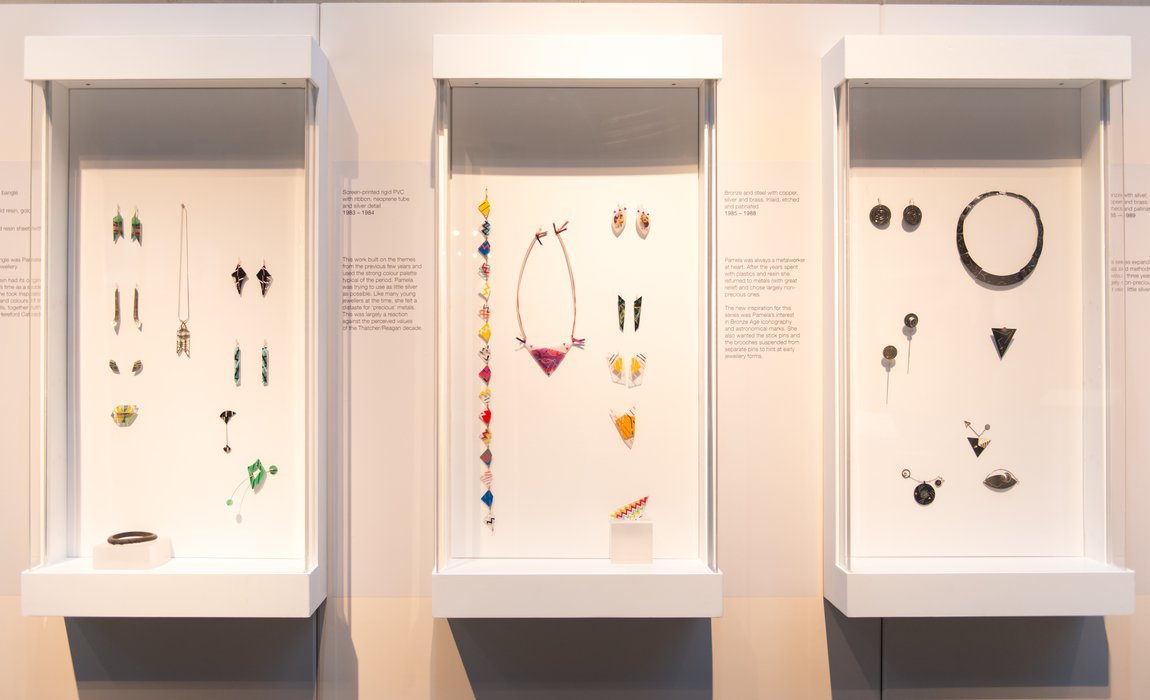