This week we spoke to Charlie Lewis, who has recently begun an apprenticeship at Stuart Ray Ltd. As the first Goldsmiths' Company chasing apprentice in thirty years, Charlie is crucial to the future of an ancient and increasingly scarce technique. 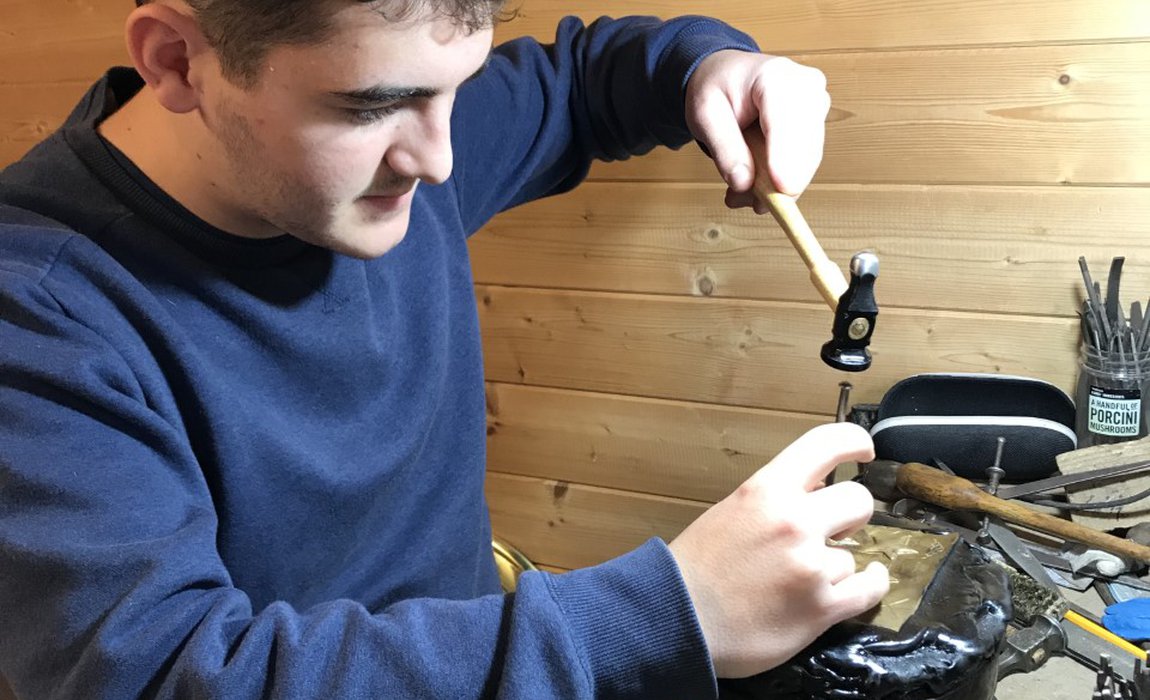 How did you get started in the industry?

My journey started from about the age of 7, that’s the first memory I have of watching my grandad doing some chasing. I have worked with him on weekends and school holidays since I was 15.

What does an average day look like for you at Stuart Ray Ltd?

I get to work just before 8:30am, and I’ll start by marking out the different pieces of work that I’ll be doing that day. Then I get all my tools that I will need for the job set out so that I’m organised and can focus on the job at hand. Then I’ll practice chasing something simple so I can get used to the tools and the material. Before I leave to go home at 5pm, I’ll have sweep up in the workshop.

Why did you choose an apprenticeship in chasing?

I chose an apprenticeship in chasing because I had seen my grandad doing it for many years and where I had been helping him since I was 15, I found it very interesting and it was something that I could see myself doing. Also, it’s a dying trade, with not many people getting into it simply because they don’t know much about it.

The thing that’s most unique about working at Stuart Ray Ltd is that most days you’ll be doing something different, this means you don’t find yourself not enjoying the job and it becoming repetitive.

Does the reality differ from the expectations you had when you were starting out, and if so, how?

I knew that learning to be a chaser was going to be difficult of course, but I didn’t know how difficult. There is not a chance that someone could learn this trade inside out overnight, but with the time and effort that I’m putting in, I’m seeing improvements all the time and know it will pay off in the long run.

Charlie at his binding ceremony.

Why do you think it’s important to keep the craft of chasing alive?

It’s very important to keep the craft of chasing alive - because it’s done entirely by hand, it’s very out of the ordinary. If our work was done by a machine instead, then firstly, there wouldn’t be any satisfaction to it and also, it wouldn’t look half as good. Chasing is a form of art. There is so much work out there, but so very few people who know and understand chasing.

Find out more about the Goldsmiths' Company Apprenticeship Scheme.